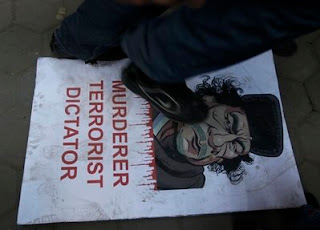 On behalf of the 270 people killed aboard Pan Am Flight 103 over Lockerbie, Scotland, in December 1988,

On behalf of all of those killed and victimized by Charles Taylor and the National Patriotic Front of Liberia, for whom you served as one of the key initial backers,

On behalf of all of those killed and victimized in Sierra Leone by Revolutionary United Front forces who attended guerrilla training camps in Libya,

On behalf of all those killed, victimized and displaced by the propagation of Arab supramacism in the Sudanese region of Darfur, which you helped create by aiding in the formation the Arab supremacist organisation Tajamu al-Arabi,

And on behalf of your own people, who you continue to victimize,

I sincerely hope, failing the proper processes against you by the International Criminal Court, that you soon come to the Benito Mussolini-like end that you so richly deserve.

Excellent. I fully agree and welcome his demise.