(Given recent events in Jamaica, there has been some interest that I repost this story I wrote from the country in 2006, which contextualizes a bit of the violence we are seeing today. MD)

When Donald "Zeeks" Phipps, one of Kingston's best-known "dons," was found guilty on two counts of murder and given a life sentence in April, many hoped it was a sign the country's politicians had put behind them their links to the gunmen who hold sway in the capital's slums.

The ruling People's National Party (PNP) and opposition Jamaican Labor Party (JLP) head toward a likely general election this year in this Caribbean country of nearly 3 million people. Opinions are mixed on whether they have abandoned their long-standing links with dons, the politically minded leaders of crime groups.

"Depending on your political allegiance, if you're a 'bad man' you look to your [political representative] to maybe help you get bail and make sure that the police treat you properly," said Carolyn Gomes, executive director of the human rights group Jamaicans for Justice. "And there are links between the gunmen and politicians, which go beyond begging for bail."

One of the chief political mentors of Portia Simpson Miller, Jamaica's prime minister, was a PNP stalwart named Anthony Spaulding, who served as minister of housing for the fiery socialist Michael Manley from 1972 until 1980. Historians say Mr. Spaulding, Mr. Manley, former JLP leader Edward Seaga and several other politicians introduced the violent tribalism known as "garrison politics," overseeing the construction of 40,000 low-income homes then purportedly distributing them as patronage to PNP supporters.

Mr. Manley and Mr. Seaga regularly attended the funerals of ghetto gunmen during the heyday of their political rivalry in the 1970s and 1980s.

Mrs. Simpson Miller came to office when she won the constituency for West St. Andrew in 1976. Her district encompassed regions of Western Kingston, where the rule of gunmen is the strongest.

"There is a stigma attached to our community because of the violence that exists around here at times," said Selvin Stewart, who teaches business at Trenchtown High School in West Kingston. "They say that the majority of problems come from these communities, but the smallest amount of effort is placed in places like this. If you want to change the problem, lend more support."

Mr. Stewart was sitting on a homemade wooden bench across the street from a modest reading center the community has opened. This is the neighborhood where Bob Marley and a host of other reggae icons grew up. Residents are slowly transforming Mr. Marley's former house into a museum with the help of a local architect. Like most in the district, the building is a modest affair of poured-concrete, one-story apartments around a common yard.

Flags of the Rastafarian faith flutter in the breeze, and murals of Mr. Marley, who died of cancer in a Miami hospital 25 years ago, and several other reggae legends decorate the walls. Raphael "Meadow Gong" Smith, a community leader fatally shot under murky circumstances in London in 1999, also is memorialized.

The rooftops of the beginning of Mrs. Simpson-Miller's district are visible in the distance. The neighborhood is also the home district of Jamaica's finance minister, Omar Davies.

Though Mr. Phipps was a PNP partisan who controlled an impoverished area around the Kingston's Mathews Lane, just south of Trenchtown, some of his cohorts have become businessmen.

Most prominent are Christopher "Dudus" Coke, who police say controls the JLP enclave of Tivoli Gardens, and his deputy Justin O'Gilvie. Mr. Coke is the son of Lester "Jim Brown" Coke, a longtime JLP enforcer whose Shower Posse was one of the most notorious gangs to migrate from Jamaica to the United States, and who died in a fire in a Jamaican prison cell in 1992.

That year, the killing of another Coke son, known as "Jah-T," set off rioting in which a score of people died. Jim Brown's gang is said to have taken an active role in violence during Jamaica's 1980 election campaign in which 889 persons were killed.

Jamaica's police say they are prepared for whatever comes in the coming campaign.

"As a police force, we are sending out a very strong, clear message that if anybody, from whichever party or affiliation, is involved in violence or threats of violence around politics, that we will be pursing them with all the vigor of the law," said Mark Shields, deputy commissioner for crime in the Jamaica Constabulary Force.

"We do not care who you are, because if you are involved in any form of violence and expect to hold an AK-47 in one hand and a ballot box in the other, we're not going to be having any of that," Commissioner Shields said.

Police officials say the Kingston dons operate with greater independence from the political leaders as they pull in money from drug trafficking and other illegal enterprises. Consequently, organized crime is contributing to Jamaica's spiraling homicide rate, which reached a record high of 1,650 last year. An average of 12 police officers are fatally shot each year on the island.

Trenchtown is divided into fiefdoms among several dons. A deceptively cheery, husky, middle-aged man in dreadlocks controls the area of the reading center and the Marley home.

The people of Trenchtown, where Mr. Marley probably did more than any other person to bring Jamaica into world consciousness, wait for the government to help them in daily struggles against poverty and crime.

"There are great qualities and great potential within this community, but, of course, it is a community that needs help," said Selvin Stewart, a Trenchtown High School teacher. "There are persons here that are forging ahead. It's rough, but they're forging ahead."
Posted by Michael Deibert at 7:11 AM No comments: 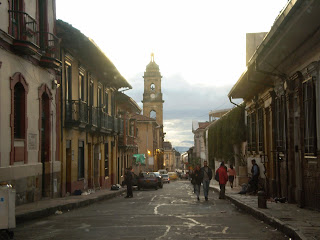 Arriving in Bogotá on Sunday morning I descended into a cool rush of bracing Andean air and the nerve centre, politically and otherwise, of this country that I have so long wanted to visit. I will be here for two weeks to work on some stories in the capital and throughout Antioquia Department and, not coincidentally, to witness the country's first presidential election that will mark that end of the rule of President Álvaro Uribe in office since 2020. Thus far a very intriguing place in many regards.
Posted by Michael Deibert at 12:43 AM No comments: