Some Monday thoughts from a fading democracy 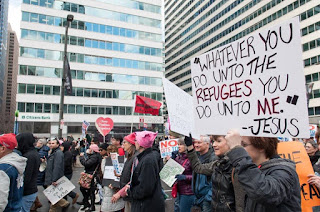 I think we are in a very dangerous moment in the United States at present.

There are clearly yawning fissures within and between our institutions - the Executive, the Department of Defense, the Department of Homeland Security, U.S. Customs and Border Protection (CBP), the Central Intelligence Agency (CIA), the Federal Bureau of Investigation (FBI), the judiciary - that should worry any clear-eyed observer, especially given the fact that Steven Bannon (who, don't forget, is a former Navy officer) is exercising so much control over Trump.

The fact that CBP (whose union, remember, endorsed Trump and whose more moderate leader was ousted once he took office) brazenly ignored a valid court order for hours and treated attorneys and even elected officials like Cory Booker with scorn when they tried to intervene, even invoking Trump's name in the process, has, to my knowledge, never happened before.

Also, make no mistake, both the Muslim Ban and the omission of Jews on Holocaust Memorial Day feed into white nationalist narrative that Bannon promotes (which is in no way undercut by the happenstance Jewishness of Trump's son in law).

New York City mayor Bill de Blasio mentioned yesterday if this is where Trump is starting, imagine where the government is heading. And imagine what their response will be when the next terrorist attack happens (and it will). I fully expect unprecedented attacks on the judiciary, the free press, the separation of powers, and I think people need to be prepared for the worst. Looking at all the signs and based on my years of reporting on politics abroad, I fear there is a strong chance this could get violent before it's all over.


Love to you all,

M
Posted by Michael Deibert at 7:49 PM No comments:

To my progressive friends: Common ground with your erstwhile conservative foes

Dear progressive friends: There ARE some conservatives and GOP folks who, to varying degrees, see Trump for what he is and realize the danger he poses. These may be people I don't agree with on a lot of issues, but on this they have (thus far ) been fairly sober when it comes to the unique peril the nation currently finds itself in. Among those I would suggest following (Twitter handles after their names):

This is by no means an exhaustive list, and I know there are issues (choice, the meaning of the 2nd amendment) on which I and these individuals would strongly disagree. But if there is one thing I have seen about despots in my 20 years as a journalist covering them (and make no mistake, that is where we are heading), it is that it takes a broad based coalition to bring them down, not a sectarian one. It is going to take bridge building on all sides for the country to get through this in one piece, and even then I think it will be a challenge like we haven't faced since the Great Depression or the Civil War. Before liberals or conservatives, Democrats or Republicans, we must now act as Americans.

L'union fait la force.
Posted by Michael Deibert at 2:07 AM No comments: