Thoughts on the passing of Senator John McCain 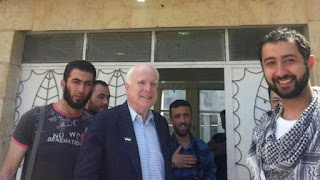 Do not take at face value those who claim to be for human rights, as so many of those criticizing the late U.S. Senator John McCain do, if they nevertheless stood silently by as Muammar Gaddafi terrorized & pauperized Libya for decades and, through his support of armed groups like the the National Patriotic Front of Liberia, the Revolutionary United Front in Sierra Leone and the Tajammu al-Arabi (later the Janjaweed) in Sudan's Darfur, probably killed more black Africans than any one single person since King Leopold.


Do not take at face value the claims of those who say that foreign policy should be approached from a position of respect, who paternalistically and dishonestly argue that Arabs are subject to "age old" enmities and thus "aren't ready" for democracy in places like Bahrain or Egypt.

Do not take at face value people the claims of those who argue they stand up for the sacredness of national borders but nevertheless, at best, sat silent and often actively applauded as the Assad crime family in Syria invited the Russians, Iranians and Lebanese onto Syrian territory to aid in its ghastly slaughter of people who, when they first rose up in 2011, simply demanded to be able to chose democratically who governs them (and if anybody doubts that, read the reports of Human Rights Watch and Amnesty International from 2011/2012 or books like The Impossible Revolution by Yassin al-Haj Saleh or Burning Country: Syrians in Revolution and War by Robin Yassin-Kassab & Leila Al-Shami).

John McCain was a very flawed politician, as he would have been the first to admit, and his flaws were often reflected in his politics. But as the world stood by and watched the dream of Syrian democracy get extinguished by Russian bombing in places like Aleppo, by chemical weapons in places like Talmenes, Sarmin, Qmenas & Khan Sheikhoun, by mass murder in Assad's death camps such asthe Saydnaya military prison, John McCain stood - and remained - on the right side of history, with the people of Syria, who have now seen that flicker of freedom that first grew visible seven years ago all but vanish. It was our generation's Guernica, and most politicians - including Barack Obama, who I voted for twice - blew it. John McCain did not.

So here lies John McCain, imperfect American, Navy veteran, public servant, and friend - when so many of my fellow self-described progressives were not - to the people of Syria. Perhaps when he gets to the other side he can talk to so many of the Syrians already there about what that meant.
Posted by Michael Deibert at 11:20 PM No comments: