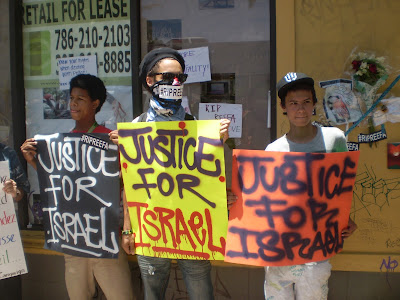 At about the time Miami Beach Police Department officers were fatally tasing 18-year-old artist and skateboarder Israel Hernandez-Llach, I was rising for the day in my apartment a few blocks away. Morning is generally the most sedate and appealing of time in the tropics, and as one side of my building faces east towards the sea, watching the sunlight cut blazing and orange through the gossamer clouds at dawn while drinking a coffee is one of the great pleasures of living here. In the midst of writing a particularly dark book about Mexican drug cartels, the moment also serves as a kind of respite, as well.

As I was sipping my coffee, Hernandez-Llach, a lithe fellow who had moved to Miami with his family from Colombia a few years ago, was confronted by police as he began tagging his graffiti name -- Reefa -- on a building at the corner of Collins Avenue and 71st Street. He only had time to write the "R" before police started chasing him. The building -- an abandoned shell that used to be a McDonald's whose windows are now covered in newspaper -- was hardly an architectural gem, and a number of other residents and I had actually commented how the look of the place had been improved by the graffiti that had started appearing there.

The police -- by most accounts almost half a dozen -- chased Hernandez-Llach throughout the neighborhood before cornering him, tasering him and reportedly high-fiving one another as he lay on the ground. Hernández was taken to the hospital where was pronounced dead. The official cause of death is still pending.

The news that authorities in Miami place a higher value on real estate -- however derelict -- than human life will come as little surprise to anyone who has been living here for the last several years, nor will the fact that the various police forces operating in Miami-Dade County (as the wider conglomeration of which Miami Beach is a part of is known) are largely out of control.

Just last month, a U.S. Department Of Justice report on the City of Miami Police Department, just across the glittering waters of Biscayne Bay from Miami Beach, found that the department "has engaged in a pattern or practice of excessive use of force through officer-involved shootings in violation of the Fourth Amendment of the Constitution" and that the Department was also tainted by "deficient tactics, improper actions by specialized units, as well as egregious delays and substantive deficiencies in deadly force investigations."

Back here on the beach, one often gets the impression that many police feel they they're on Spring Break, rather than policing those who are, such as when a uniformed cop took a woman on a drunken pre-dawn joy ride on his department-issued ATV and ran over -- and then left -- two tourists waiting to see the sunrise. In another incident, the city had to pay out a $75,000 settlement after two officers were accused of beating a handcuffed gay man, attacking a witness and spewing anti-gay epithets. One officer was fired, then reinstated. The circumstances of the 2011 fatal shooting of Raymond Herisse during the largely African-American Urban Beach Weekend have yet to be fully explained. Meanwhile, in tony Bal Harbour, the police force there treated itself to $3,200 golf outings, trips to Puerto Rico and shopping sprees at the exclusive Bal Harbour Shoppes mall with millions of dollars the department had seized from drug dealers.

The death of Hernandez caps a summer during which a kind of malaise has settled over the city that even a second consecutive Miami Heat NBA championship can't quite dissipate.

Miami-Dade County is governed by a convoluted system whereby the mayor and the Board of County Commissioners run the county as a whole, but within the county there are innumerable little quasi-independent "cities" (some only stretching a few blocks) that have their own police forces, zoning ordinances and so on. One county commissioner, Javier D. Souto, said at a recent special session of the commission that I attended that the system was so complex that even some of the commissioners themselves didn't fully understand it.

Carlos A. Giménez, a retired Cuban-American firefighter, was elected Miami-Dade County mayor in June 2011 following the recall of Mayor Carlos Alvarez (largely bankrolled by former Philadelphia Eagles owner Norman Braman). Promising reform and clean governance, Giménez has thus far seemed to have forgotten that governing a city is about more than lining the pockets of its already fabulously wealthy real estate developers.

Miami's skyline is dotted with construction cranes servicing a luxury apartment boom (a 2011 UBS study ranked Miami as the richest city in the country by pure domestic purchasing power), but the city also has the second-highest income inequality rate in the United States.

Miami-Dade County borrowed about $400 million to pay for a new stadium for the Miami Marlins baseball team by selling bonds on Wall Street, and one set of stadium bonds - worth about $90 million - will now cost the county more than $1 billion to pay back.

After proposing a small property tax rate hike to enable to county to maintain basic services such as fire rescue, libraries and no-kill animal shelters, Giménez reversed course and supported the country commission's 8-4 vote to cut services, later declaring "the age of the library is probably ending" when people questioned the wisdom of the county closing nearly half its branches. This no doubt came as music to the ears of Commissioner Juan C. Zapata, who voted to defund the libraries and whose "non-profit" Read2Succeed! "actively promotes the importance of literacy and unites our community through the power of reading." Or, in other words, does what libraries do but less efficiently and on a far smaller scale.

One must also wonder, given the role of libraries as internet centers, where Miami-Dade's 10 percent unemployed will now apply for unemployment online, as Florida Governor Rick Scott recently required they do (such measures are taken when Scott is not busy trying to purge voters from state rolls) or where they will find free internet to find a new job online.

It seems as if not a single week passes without some elected official being lead away in handcuffs. This week it was Sweetwater Mayor Manuel Maroño and Miami Lakes Mayor Michael Pizzi hauled in by FBI agents for conspiring to commit extortion. A few weeks before that it was Former Hialeah Mayor Julio Robaina (who finished second in the 2011 Miami-Dade County mayoral race behind Gimenez) for tax evasion. Who it will be next week is anybody's guess.

The charms of the city remain considerable. The lavender twilights, the musical lilt of Spanish, Portuguese and Haitian Creole one hears on the streets, the festiveness with which the city explodes into a street party at the drop of a hat. And what other municipality in the United States would declare 3:05 p.m. an official coffee break time, when all should pause and reflect on the magnificence of the cafecito?

Nevertheless, in the needless death of Israel Hernandez-Llach, who was just starting his life, one can briefly glimpse a city whose values seem increasingly awry, putting the almighty dollar reflected in that famous skyline above the citizens who live beneath it and, now, above human life itself.

This evening, just as the rain clouds were getting ready to roll onto the beach from the ocean, I went and looked at the makeshift memorial that had sprung up outside the derelict building that Israel Hernandez-Llach had been spray painting when Miami Beach police set upon him. "I'll see you around" read one note. "Rest in Paradise" read another. And "I'll miss you so much, brother." As I stood there, a young man with a ponytail and a goatee, probably also about 18, pulled up on his bike and gently placed two spray paint cans above the doorway where someone had place a bouquet of flowers.

"I didn't know him personally," the youth said to me. "But you've got to give mad respect to him. As a street artist."

And then he got on his bike and peddled away just as it began to rain.
Posted by Michael Deibert at 5:49 PM No comments: 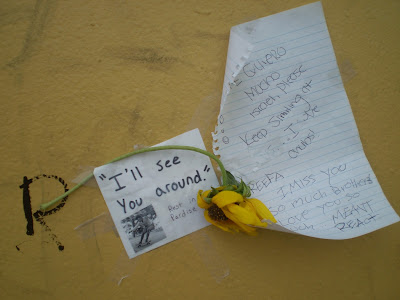