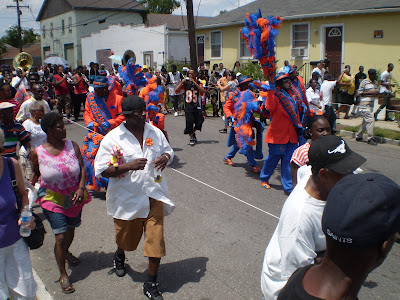 Posted by Michael Deibert at 4:49 AM No comments:

A Note on the Passing of Tim Hetherington and Chris Hondros

By now, the news of the killing of journalists Tim Hetherington and Chris Hondros by the forces Libyan dictator Muammar Gaddafi in the besieged city of Misrata has spread around the world. Hetherington was the co-director of the film Restrepo, which chronicled a year spent embedded with the Second Platoon, B Company, 2nd Battalion, 503rd Infantry Regiment of the 173rd Airborne Brigade Combat Team in the Korengal valley in Afghanistan, and Hondros was a photographer of great distinction whose work I had long admired.

I didn't know either man personally, though, the world of international reportage being as small as it is in these days of shrinking new coverage, we had quite a number of friends in common.

But, although journalists covering this ground quickly make their peace with the idea that one day they would go out and it might be their last, and though I am relatively sure that both men would point out the irony that their passing should attract so much attention after the world has sat back for weeks and let the people of Misrata get slaughtered, it is appropriate to take a moment and reflect on their loss.

Without the work of reporters like Hetherington, who provided us with one of the most important portraits of the Afghanistan conflict, and Hondros, whose 2003 photos of the civil war in Liberia remain some of the best war photography I have ever seen, the rest of the "developed" world would be able to suck its collective thumbs, stuff its face and drive its SUVs with nary a thought for people in the kinds of desperate circumstances both men documented.

A moment of mourning, both for the men themselves and for all the important stories that will not be told because of one more deluded dictator. Perhaps, if there is any silver lining, this terrible incident will help wake the world and its leaders up to the reality of what is happening to the people of Misrata, which has been laid siege to by Gaddafi's forces for nearly two months and witnessed hundreds of people being killed.

Posted by Michael Deibert at 12:45 PM No comments:

Of Haiti and Côte d'Ivoire

Reading the novelist Venance Konan's excellent Op-Ed in the New York Times the other day - about how he watched his friend and colleugue Laurent Gbagbo go from the kind of person who went to jail for fighting for democracy to a man who, as much as anyone, undermined it and fanned the flames of ethnic hatred in post-Félix Houphouët-Boigny Côte d'Ivoire - I found the similarities with Haiti, and another leader who went from being a champion of democracy to the nastiest sort of despot, inescapable.

Apropos of Konan’s article, a fellow journalist wrote to me that “[Gbagbo’s] resisting the international community would be almost heroic, if one did not suspect that he's a very bad man. And [Alassane] Ouattara seems typical of the kind of person who wins elections organized by the UN and US: a technocrat, Western-trained, etc. with international banking creds, like Ellen Sirleaf in Liberia.”

My view is this: As in Haiti with Jean-Bertrand Aristide, anyone who has visited Côte d'Ivoire with their eyes open knows quite well and has seen ample evidence that Gbagbo is a bad man, they don't just suspect it. And they just a certainly they know that, like Gbagbo's forces, Ouattara's supporters in the Forces Nouvelles have committed gross human rights abuses.

Given Côte d'Ivoire's particular history, though, I would not only refer to Ouattara as "the kind of person who wins elections organized by the UN and US," but also as the kind of person who wins elections in a country where the 1960 to 1993 government of Houphouët-Boigny encouraged massive migration into Côte d'Ivoire from neighboring countries such as Mali, Burkina-Faso and Guinea, only to spur a venomous backlash to that policy in terms of the discriminatory ivoirité rhetoric of Henri Konan Bédié and Gbagbo himself following Houphouët-Boigny's death. Given the ethnic and religious make-up of present-day Côte d'Ivoire, and Gbagbo's wretched record as president, it is not at all surprising that Ouattara would win a presidential election there, UN organized or not.

I think the interesting thing is how, like Aristide, Gbagbo was once perceived by those who know him best as exactly the kind of person his country needed to leave the dark days of despotism and oppression behind and start on a new, more just and correct course, and how he eventually became the epitome of everything he claimed to have been fighting against all along.

Of course, with the exception of the nutters of the Christian right in the United States, Gbagbo really doesn't have the PR machine of greased-palm attorneys, former and future lobbyists, armchair academics, ignorant or ideologically-blinded journalists and professional "activists" working to whitewash his ghastly history that Aristide still does. At least those years in exile in DC taught him to do something right, I guess, even if governing Haiti wasn’t it.

Despite their great challenges, though, I hope that 2011 marks a brighter year for Haiti and Côte d'Ivoire under the leadership of their new presidents, Alassane Ouattara and Michel Martelly. May they somehow resist the temptations that proved so irresistible to those who came before them.
Posted by Michael Deibert at 7:41 PM No comments:

Refugees tell of Côte d'Ivoire violence after fleeing to Liberia

Posted by Michael Deibert at 3:13 PM No comments:

Posted by Michael Deibert at 12:32 AM No comments: