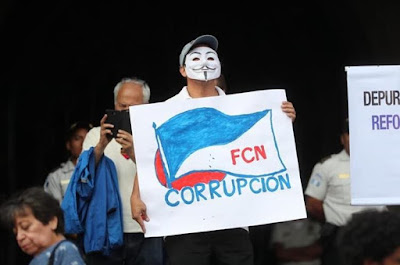 The Comisión Internacional contra la Impunidad en Guatemala (CICIG) was formed as an outgrowth of the peace accords that ended Guatemala's 36 year civil war. It was tasked with supporting the country's Ministerio Público & Policía Nacional Civil (PNC) in their investigations of illegal security groups and clandestine security structures with direct or indirect links to the state or ability to block judicial actions related to their illegal activities.

I have been reporting on Guatemala for 15 years and I have been scathingly critical in my writing of parties of both the right (Partido Patriota, Frente Republicano Guatemalteco, Frente de Convergencia Nacional) and the left (Unidad Nacional de la Esperanza) and their roles in maintaining this system that is strangling the country. To anyone who has spent any time in Guatemala, it is clear that the cancer of corruption and impunity in not an ideological struggle but a phenomenon from which all political currents benefit and seek to maintain.

As the net closes in on Guatemala's political elite - especially sitting president Jimmy Morales, his family and his supporters - troll armies, many with links to online marketing businesses based in Guatemala City, have emerged.

The politicos and their troll farms are feverishly working around the clock to muddy the waters and drum up support for the expulsion of CICIG before their backers have to face justice for their crimes. The troll army follows a particular pattern including variations of the following:

2) Claim that CICIG chief Iván Velásquez is linked to Colombia's FARC or the government of Venezuela's Nicolás Maduro, even though no evidence exists for this and CICIG arrested the country's first leftist president (Álvaro Colom) since Jacobo Árbenz was in office from 1951 to 1954, only to be overthrown by CIA-engineered coup.

4)  The troll army then, usually fairly quickly, curdles into anti-semitic dog-whistles by blaming George Soros etc for the temerity of CICIG & the Ministerio Público to prosecute corrupt Guatemalan officials for their crimes.

Unfortunately, they have been so effective that some people I respect and other people of influence - Mary Anastasia O'Grady, Bill Browder, Mississippi Senator Roger Wicker, Florida Senator Marco Rubio, New Jesery Representative, Chris Smith & others - have (with the best intentions, I think) been swept up in the desperate fight for survival of Guatemala's corrupt political actors.

A closer look at recent events in Guatemala - such as the revelation of illicit campaign financing by the FCN of president Jimmy Morales - reveals a truer picture, that those who have feasted on the prostrate body of the Guatemalan nation and state for decades feel they are fighting for their very lives.

My advice to those seeking to weigh in on role of CICIG in Guatelama would be to look at the totality of CICIG's work there over the last decade and weigh it against the forces arrayed against it & what their motivations may be. The lives of 17 million Guatemalans, and their struggle to build a decent country depend on it.

Posted by Michael Deibert at 6:01 PM No comments: