We made it! Democratic Republic of Congo: Between Hope and Despair reaches funding goal on Kickstarter

Thanks to a pledge from Jean R. Laraque and increase in the pledge of my old friend Matthew Moran, today - Sunday morning - we reached and exceeded our Kickstarter goal of $3,500 for a grand total of $3,512. This means that now - as pre-election violence has claimed at least for lives in Kinshasa in the run-up to today's contest between President Joseph Kabila and challenger Etienne Tshisekedi - I will be able to return to Central Africa in February to conduct a final round of interviews and research for my upcoming book, Democratic Republic of Congo: Between Hope and Despair, which will be published next year by Zed Books in cooperation with the Royal African Society, the International African Institute, the Social Science Research Council and Justice Africa.

All of us who have spent time in Congo have not failed to be moved by it: By the incredible resourcefulness of the people, by the varied and dramatic landscapes covering the heart of the African continent, and by the terrible violence with which its citizens have been forced to contend, buffeted back and forth by political and economic currents that are often far beyond their control.

Thank you to everyone who chose to back this project, with a special thanks to Hilary Wallis for the use of her evocative photograph on the fundraising page. In the writing of Democratic Republic of Congo: Between Hope and Despair, I will do my best to earn your support and to do justice to this very complex story that has continued to progress largely out of the international community's field of vision for so many years.

I thank you all again.

With sincere gratitude from New Orleans,

MD
Posted by Michael Deibert at 9:19 PM No comments:

Carlos Castresana responds to the Economist

Carlos Castresana, the former head of the United Nations-mandated Comisión Internacional Contra la Impunidad en Guatemala (CICIG) - the body charged with investigating clandestine organisations and exposing their relation to the Guatemalan state - responded this week to what I thought was a fairly awful article in the Economist about Guatemala last month.

The Economist piece, titled "Parachuting in the prosecutors," repeated pretty much every slur and innuendo against Castresana that the UN bureaucrats who served as nearly as great a hurdle to CICIG's success as Guatemala's criminals have ever whispered about the Spanish prosecutor in their sleek halls along the East River.

Given what I believe is the important role that CICIG may still play in the fight against the criminal oligarchy whose power is pointed like a dagger at the heart of Guatemala democracy, I thought it worth re-printing Castresana's response in full here.

For my views on that oligarchy, readers can look at my 2008 piece, "Drugs Vs. Democracy in Guatemala," first published in the World Policy Jounal, or my Op-Ed last year in the Guardian, "Guatemala's lonely battle against corruption."

SIR – I want to express my surprise and disappointment at the remarks you made about me in your article on the International Commission Against Impunity in Guatemala (CICIG), which I headed until June 2010 (“Parachuting in the prosecutors”, October 15th). Your description of me as a “clever, cavalier and publicity-seeking Spanish prosecutor” was unfair to say the least. My team and I did our best during three years, risking our families, lives and careers.

I was also offended by your statement that I left CICIG in June 2010 after allegations about my private life. I refer you to a complete and balanced explanation of the circumstances of my resignation in your own pages from an article at the time (“Kamikaze mission”, June 19th 2010).

But more disturbing was your observation that “there was little oversight of Mr Castresana, causing discomfort in New York about how CICIG was operating”. In fact, CICIG was permanently supervised and its accounts audited by the United Nations Development Programme, as that was the agency which managed the donor countries’ trust fund. All substantive matters were exhaustively controlled by the UN Department of Political Affairs and supervised by the secretary-general himself. I sent 314 cables to the UN and reported daily by telephone, and in person in New York every couple of months, as well as filing ten quarterly reports to the secretary-general throughout the three years of my mandate.

Furthermore, while you were publishing your biased report a selection process was under way for an international judicial position for which I was included as a candidate. You might not have been aware of that ongoing process, but surely some of your sources were. I am persuaded that those who made the decision were not influenced at all by your publication, but the fact is that your article appeared just after the interviews, when a decision was being made.

I made many enemies in Guatemala. I am not worried about that, it comes with the job of prosecutor. But on future occasions, before you publish such disinformation, please call me and give me the opportunity to defend my name and my professional work in advance. That way you might get a better and complete story.

Carlos Castresana
Prosecutor of the Supreme Court of Spain
Madrid
Posted by Michael Deibert at 12:20 AM No comments:

On Kristallnacht and the DRC

Today is the anniversary of Kristallnacht, as the series of Nazi attacks against businesses owned by Germany's Jews are called, regardless of one's native language. I notice that this grim signpost is receiving a respectable amount of coverage and attention but, deep as I am into the writing of my new book on the wars in the Democratic Republic of Congo, I must confess that I have one strong feeling today.

Over the last decade and a half, as many people have died in the Democratic Republic of Congo as died during the Holocaust, many as the result of ethnically-based slaughter, all while the West at best largely stood by and at worst actively colluded with the killers. There are places in eastern Congo where as one writer noted one would feels they have stepped into a scene out of the Old Testament. Is it because the Congolese were black and African that so few people know the names of places like Mbandaka, Tingi-Tingi or Kasika? Are we as news writers and news consumers that myopic and that blinded by our own stereotypes of Africa and Africans?

I fear not a whole lot has changed.
Posted by Michael Deibert at 9:34 PM No comments:

Support Democratic Republic of Congo: Between Hope and Despair on Kickstarter 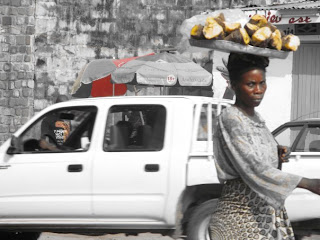 I am attempting to raise funds via Kickstarter to enable me to complete a final round of research interviews in Central Africa for my book, Democratic Republic of Congo: Between Hope and Despair, to be published by Zed Books next year. The goal to be reached over the next 30 days is $3,500, which will cover airfare and accommodation between the United States and Africa. Nearly $1,000 has been raised thus far.

Published in cooperation with the Royal African Society, the International African Institute, the Social Science Research Council and Justice Africa, the book will closely examine the Congolese state as it exists now under the rule of President Joseph Kabila, and how that state was shaped by the long-term involvement of the United States and Europe in supporting and arming many of the belligerents in Congo’s conflicts, the ongoing murky role played by foreign interests in exporting mineral resources linked to the country’s continuing instability and Congo’s own tortuous political and ethnic legacies.

Please consider donating what you can on the project's page on Kickstarter here, and please consider spreading the news of it to those who you feel might support this important new look at recent events in Central Africa.

Many thanks for your time and your support.

Posted by Michael Deibert at 5:10 AM No comments: