What Lies Behind the Unrest in Haiti? 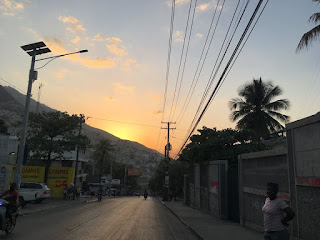 What Lies Behind the Unrest in Haiti?

As soon as Brazil went down in defeat to Belgium in the World Cup earlier this month, the barricades began to appear. In Haiti, a football-loving country whose fans are divided between passionate supporters of Brazil and Argentina, the government of President Jovenel Moïse had just announced an end to subsidies in the price of fuel. Part of the terms of a deal hammered out with the International Monetary Fund earlier this year, the move set prices to skyrocket overnight, with the price of petrol set to increase by 38%. In a country where World Bank figures put more than more than 6 million of Haiti’s nearly 11 million people living on less than US$2.41 per day, the news was too much to bear.

Along with the de rigueur forms of protest - burning tires and barricades made of tree branches, cement blocks and other cast off material - there was very targeted violence, as well. The Delimart, a grocery store along the busy Route de Delmas thoroughfare, was looted and burned. In Pétionville, a once-tony enclave in the hills above the city now ringed with bidonvilles (slums), a mob marched to the glittering Best Western, a favored locale for international diplomats and businesspeople, and shattered its windows and glass facade with hurled stone before moving on to another target. Scores of cars were not stolen, but were set aflame instead, as a kind of smoldering, stygian warning. By Saturday night, the government had reversed itself, indefinitely suspending the fuel hike, and there were calls for Moïse’s Prime Minister, Jack Guy Lafontant, to resign. This past weekend, he did just that.

Less than a year after the end of a United Nations peacekeeping mission in Haiti, known by its acronym MINUSTAH,  after a 13 year presence in the country (which saw, among other distinctions, the unintentional bringing of a cholera epidemic to Haiti by UN troops) and a little over a year since Jovenel Moïse assumed office, Haiti’s political demons, somewhat dormant in recent months, appear animated again. The question is, why now?

Moïse became president as the candidate of the Parti Haïtien Tèt Kale (PHTK), the political current founded by the man who preceded him in that office, Michel Martelly, a famous crooner of Haiti’s konpa music and better known by his nickname, Sweet Micky (Tèt Kale means “bald head” in Haiti’s poetic Creole language and refers to Martelly’s gleaming pate). Like a number of political currents before them including the Lespwa (Hope) coalition of the late René Préval (whose second term as president spanned 2006 to 2011) and the Fanmi Lavalas party of Jean-Bertrand Aristide (whose 2004 overthrow precipitated MINUSTAH’s deployment), PHTK is a juggernaut of opportunistic political operators less focused on a rigid ideology than on ambition, personal and political. Though both Martelly and Moïse worked mightily to bring foreign investment to Haiti, they have done so in a political atmosphere of rampant cronyism and corruption (a value judgment that includes the country’s bi-cameral parliament and opposition as well as the executive) and lingering questions about how $2 billion of money linked to the Venezuelan Petrocaribe fuel program - overseen by Préval and then Martelly - was spent.

Despite the ostensible return to Haiti of democracy more than a decade ago, life for the average Haitian continues to be a series of grinding endeavors to stay just out of the jaws of destitution. Though it is often loathe to issue a mea culpa, the policies of the international community have often contributed to this despair.

In the early 1980s, a U.S.-Canadian funded program killed most of the country’s pigs due to worries they might be infected with African swine fever, and only haphazardly replaced them. A draconian World Bank-sponsored structural adjustment program of austerity and privatization in the mid 1990s lowered the tariff on imported rice from 50 percent to 3 percent, effectively destroying the ability of Haiti’s domestic rice producers to be competitive. For years, assistance to Haiti’s beleaguered agricultural sector has often been only a fraction of its total foreign aid, leading to an influx of internal migrants to cities around the country, especially the capital, Port-au-Prince, where many of them died in Haiti’s devastating 2010 earthquake.

Much has been made of the muted response by the Police Nationale d’Haïti (PNH), Haiti’s national police force, to the violence. This is doubtless due to at least in part to the prickly relationship between Moïse and PNH chief Michel-Ange Gédéon, whose authority Moïse appeared to undercut with a controversial May decree. Though though many rank and file members of the PNH work diligently for meagre pay under grueling conditions, the moral of the body is constantly undermined by politicians who pay armed actors around the country (referred to as the baz, or base) to commit violence and deliver votes at election time.

Though the use of irregular armed partisans dates back in Haiti at least to the reign of Faustin Soulouque, who ruled from 1847 to 1859, the practice became part of the country’s political DNA during  the 1957-1986 Duvalier family dictatorship (whose milita was the feared Tontons Macoutes) and Jean-Bertrand Aristide’s truncated 2001 to 2004 term (in the shape of quite young gunmen referred to as chimere, after a mythical fire-breathing demon) and now has metastasized down to the most local level. Nowhere is this more apparent than in the Port-au-Prince neighborhood of Martissant.

Set in the southern hills above the capital, Martissant has been carved into smaller zones of influence for various baz leaders, with names such as Ti Bois (Little Woods) and the self-explanatory Grand Ravine. In 2012, a young policeman named Walky Calixte was slain in the zone. Despite what a judge said were phone records linking two parliamentarians - Rodriguez Séjour and M’Zounaya Bellange Jean-Baptiste - to the crime and police protests, Haiti’s parliament refused to lift their colleagues’ immunity and the killers were never brought to justice. When a former Grand Ravine baz leader, Romelien Saint Jean (also known as Tèt Kale though not directly affiliated with the PHTK), was released from prison last month and tried to reassert control, he was slain by his successor, bearing the nom de guerre Bougoy, who has also been linked to the disappearance of Haitian journalist Vladimir Legagneur this past March. Much of the violence in the zone is believed linked to positioning ahead of elections scheduled for next year.

Their families driven into the capital’s slums years ago by the destructive policies foisted upon the country by outside entities, the baz has shown they are still a potent tool in the hands of actors, public and hidden, in Haiti’s political firmament, as an anecdote told to me by a friend in Haiti amid this week’s violence makes clear.

A mob arrived to set fire to a businesses by the house of a woman she knew. Some people from the neighborhood came out to talk with them and to ask them to not go through with it as the building was near a bunch of homes that could have caught fire. After listening to them, the leaders of the mob told the residents they were “sorry” but “we have a job to do and we have to go through with it."

Michael Delbert is the author of Haiti Will Not Perish: A Recent History (Zed Books) and is a Visiting Scholar at Franklin & Marshall College.
Posted by Michael Deibert at 5:18 PM No comments: