We All Need To Breathe

[Note: I translated this statement by the Cuban actress Iris Ruiz on the death of George Floyd, the subsequent protests and what they mean to Cuba's democratic movement. Any mistakes in the text are mine, not hers. The San Isidro Movement was formed in 2018 to defend the rights of Cubans to freedom of expression and freedom of assembly and, in addition to Ruiz, includes such cultural actors as the poet Amaury Pacheco, the artist Luis Manuel Otero Alcantara and the gallerist Yanelys Nuñez Leyva, among others. Please read and share as you see fit. MD]

We All Need To Breathe 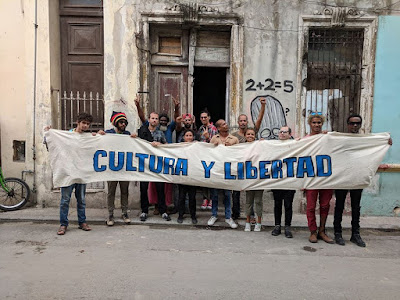 If I have learned anything in recent years from the experience of the civic struggle in Cuba within the San Isidro Movement, it is intersectionality. There are multiple and non-homogeneous motivations behind the slogan "Down with communism!" If you live in Cuba and are oppressed by the communist regime but you are white, it is one thing. If you are black, it is another. If you are not from Havana, another, and if you are a woman or gay, or if you come from marginal, impoverished neighborhoods, another still. If your family had possessions and they took them away, or if they were illiterate and learned to read and write with the "revolution.” If your parents ate the harvest for pleasure, if you stayed on the work trip, you married the Russian, the Italian. If they threw eggs at you when you left, if you arrived on a raft or had to cross jungles and deserts with smugglers. If they send you a remittance or you live off your salary. If you repatriated. And so on. Layer upon layer of oppression and accumulation of fears, pains and hatreds.

Thus, the perspective that we are shaping for a new Cuba is different depending on the glass through which  we look at it or what one would say in good theater: The mask we put on to look our own reflection.

“I can't breathe!” George Floyd cried as he was dying and, unlike the years when the bagasse curtain did not allow Cubans who were inside the island to access information from other countries, or participate in the world, or even comment, today we can. Thanks to Cubans who fought and died for internet access and thanks to those who still fight against laws and decrees like Decree 370 inside and outside the country, today we can and we are going to use our voices and our bodies for good, because they are profits from our struggle.

Dialogue, debate, discussion, tiradera or catharsis are exercises inherent in the opening of a body that has been hardened and almost putrefied, pestilential and immobile for 61 years. A dead civility, a corpse that we now dissect, at the same time that we cry and we want to say everything that we couldn’t and above all that we love, because the death of those whom we love so much hurts us for more defects that it has and for how diverse we are . While it is true that our societies are structurally and culturally racist and oppressive, it is also true that we have traditionally built structures and cultures of struggle for freedom, whether it be peaceful, non-violent resistance or through rebellion and war.

Although we have gained some of those freedoms, we still have many to gain. We should not be stuck in our comfort zones. Although the evil that moves us is communism, we have also become citizens of the world and our civic responsibilities are broader now.

The cry of George Floyd was not for us to see the black, the Indian, the Chinese or the white, the Cubans or the Americans, the communists or capitalists that we are and that we have been, that we should already know. Our human history has given us more than enough evidence of these differences and what it has left as the consequences. If we continue to be deaf to those words and, believing that we are right, we cover our mouths or those of others and arrogantly stifle their opportunities and rights and opinions, we are not positioning our ideologies, we are killing our humanity. That is the crime. Absolutely all of us must breathe and if we cannot, we are dead.

[Note: Bagasse is the pulpy residue left after the extraction of juice from sugar cane. Decree 370 is a draconian new law aimed at curtailing freedom of expression over the internet.]

Posted by Michael Deibert at 8:30 PM