After Charles Taylor, Justice for Haiti?


After Charles Taylor, Justice for Haiti?

The conviction today by the International Criminal Court (ICC) of former Liberian president Charles Taylor for aiding and abetting war crimes committed in neighboring Sierra Leone -- the first such conviction of a former head of state -- is a welcome development for those seeking to hold politicians accountable for their crimes.

Coming as it does on the heels of the conviction earlier this year of former Democratic Republic of Congo militia leader Thomas Lubanga for war crimes, the Taylor conviction represents a welcome completion of one of the ICC's missions.

To those of us who have seen the political convulsions of the Caribbean nation of Haiti first-hand over the years, the country makes a compelling case for attention by the ICC as perpetrators of human rights abuses often go unpunished or are even rehabilitated in subsequent governments.

Duvalier, who took the helm of Haiti in 1971 as a rotund teenager following the death of his father, the dictator François Duvalier, presided over a police state where the national treasury was viewed as little more than a personal checking account and all political dissent was ruthlessly crushed. Perhaps the best symbol of his reign, which ended in 1986 amid a popular uprising, was a prison on the outskirts of the Haitian capital called Fort Dimanche, where thousands of enemies of the state were sent to die by execution, torture or to simply waste away amidst conditions that were an affront to humanity.

Mr. Aristide, one of the driving forces behind the movement that ousted Mr. Duvalier, is a former Catholic priest who twice served as Haiti's president and was twice ousted, once by a military coup and once by a popular uprising and armed rebellion. It was the abuses of Mr. Aristide's government that I witnessed first-hand.

In February 2004, in the midst of the chaotic second rebellion against Mr. Aristide's rule, the photojournalist Alex Smailes and I found ourselves in the central Haitian city of Saint Marc, at the time the last barrier between Aristide and a motley collection of once-loyal street gangs and former soldiers who were sweeping down from the country's north seeking to overthrow him.

Several days earlier, on Feb. 7, an armed anti-Aristide group, the Rassemblement des militants conséquents de Saint Marc (Ramicos), based in the neighborhood of La Scierie, had attempted to drive government forces from the town, seizing the local police station, which they set on fire.
On Feb. 9, the combined forces of the Police Nationale d'Haiti (PNH), the Unité de Sécurité de la Garde du Palais National (USGPN) -- a unit directly responsible for the president's personal security -- and a local paramilitary organization named Bale Wouze (Clean Sweep) retook much of the city.

By Feb. 11, a few days before our arrival, Bale Wouze -- headed by a former parliamentary representative of Aristide's Fanmi Lavalas political party named Amanus Mayette -- had commenced the battle to retake La Scierie. Often at Mayette's side was a government employee named Ronald Dauphin, known to residents as "Black Ronald," often garbed in a police uniform even though he was in no way officially employed by the police.

When Alex and I arrived in the town, we found the USGPN and Bale Wouze patrolling Saint Marc as a single armed unit. Speaking to residents there -- amidst a surreal backdrop of burned buildings, the stench of human decay, drunken gang members threatening our lives with firearms and a terrified population -- we soon realized that something awful had happened in Saint Marc.

According to multiple residents interviewed during that visit and a subsequent visit that I made to the town in June 2009, after government forces retook the town -- and after a press conference there by Yvon Neptune, at the time Aristide's Prime Minister and also the head of the Conseil Superieur de la Police Nationale d'Haiti -- a textbook series of war crimes took place.

Residents spoke of how Kenol St. Gilles, a carpenter with no political affiliation, was shot in each thigh, beaten unconscious by Bale Wouze members and thrown into a burning cement depot, where he died. Unarmed Ramicos member Leroy Joseph was decapitated, while Ramicos second-in-command Nixon François was simply shot. In the ruins of the burned-out commissariat, Bale Wouze members gang raped a 21-year-old woman, while other residents were gunned down by police firing from a helicopter as they tried to flee over a nearby mountain. A local priest told me matter-of-factly at the time of Bale Wouze that "these people don't make arrests, they kill."

According to a member of a Human Rights Watch delegation that visited Saint Marc a month after the killings, at least 27 people were murdered there between Feb. 11 and Aristide's flight into exile at the end of the month. Her conclusion was supported by the research of the Réseau National de Défense des Droits Humains, a Haitian human rights organization.

Following Aristide's overthrow, several members of Bale Wouze were lynched, while Yvon Neptune turned himself over to the interim government that ruled Haiti from March 2004 until the inauguration of President René Préval in May 2006.

Held in prison without trial until his May 2006 release on humanitarian grounds, a May 2008 decision by the Inter-American Court of Human Rights found the Haitian state had violated the American Convention on Human Rights in its detention of Neptune, though stressed that it was "not a criminal court in which the criminal responsibility of an individual can be examined." Neptune ran unsuccessfully for president in Haiti's 2010 elections.

After being jailed for three years without trial, Amanus Mayette was freed from prison in April 2007. Arrested in 2004, Ronald Dauphin subsequently escaped from jail, and was re-arrested during the course of an anti-kidnapping raid in Haiti's capital in July 2006. Despite several chaotic public hearings, to date, none of the accused for the killings in La Scierie has ever gone to trial.
Frustratingly for the people of St. Marc, far from being supported in their calls for justice, the events they experienced have become a political football among international political actors.

The United Nations independent expert on human rights in Haiti, Louis Joinet, in a 2005 statement dismissed allegations of a massacre and described what occurred as "a clash", a characterization that seemed unaware of the fact that not all among those victimized had any affiliation with Haiti's political opposition.

The Institute for Justice and Democracy (IJDH), a U.S.-based organization, has lauded Mr. Dauphin as "a Haitian grassroots activist." The IJDH itself maintains close links with Mr. Aristide's U.S. attorney, Ira Kurzban, who is listed as one of the group's founders, has served as the chairman of its board of directors and whose law firm, according to U.S. Department of Justice filings, earned nearly $5 million for its lobbying work alone representing the Aristide government during the era of its worst excesses. By comparison, the firm of former U.S. congressmen Ron Dellums received the relatively modest sum of $989,323 over the same period.

When I returned to St. Marc in June of 2009, I found its residents still wondering when someone would be held accountable for the terrible crimes they had been subjected to. Amazil Jean-Baptiste, the mother of Kenol St. Gilles, said simply, "I just want justice for my son." A local victim's rights group of survivors of the pogrom, the Association des Victimes du Génocide de la Scierie (AVIGES), formed to help advocate on residents' behalf, but have had precious little success in what passes for Haiti's justice system, broken and dysfunctional long before January 2010's devastating earthquake.
Though Mr. Aristide remains something of a fading star for a handful of commentators outside of Haiti -- most of whom have not spent significant time in the country, cannot speak its language and have never bothered to sit down with the victims of the Aristide government's crimes there -- to those of us who have seen a bit of its recent history firsthand, the words of veteran Trinidadian diplomat Reginald Dumas -- a man who does know Haiti -- seem apt, that Mr. Aristide "[acquired] for himself a reputation at home which did not match the great respect with which he was held abroad.''

The ICC has sometimes been criticized for acting as if war crimes and crimes against humanity are simply African problems, taking place in distant lands. The people of St. Marc, only a 90 minute flight from Miami, and the survivors of Forth Dimanche, know differently. Though Mr. Duvalier sadly cannot be tried by the ICC as the court only has jurisdiction with respect to crimes committed after the entry into force of Rome Statute, no such restrictions apply to Mr. Aristide.

It is time that the government of Haitian president Michel Martelly and Haiti's parliament ratify the Rome Statute of the International Criminal Court and give the victims of Haiti the justice that they have so long been denied.

Posted by Michael Deibert at 1:30 PM No comments:

The Story of the Acholi : A Village Tale from Uganda 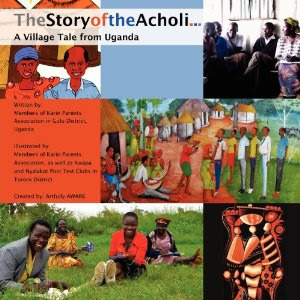 (Note: I contributed in a modest way to this book, but it is definitely worth picking up for the beautiful illustrations by the Ugandan participants alone. It can be purchased on here. MD)

An incredible 2011 Artfully AWARE summer program led to the creation of our AfA storybook entitled The Story of the Acholi – A Village Tale from Uganda.

This was born out of a project that encouraged Acholi community members living in Gulu, northern Uganda to write, paint and perform about their personal stories consisting of family, positive health and peace & reconciliation after the 20 year civil war.

Our 56 page storybook is written in both English and Acholi languages, is full of colorful illustrations, displays photographs of participating community members and captures personal quotes about this intimate and ultimately empowering project. It is suitable for children over the age of five, and it makes a wonderful gift for friends and family, as well as a great educational resource for the classroom and at home.

100% of proceeds raised through the purchase of our book goes straight back into developing more educational arts programs for community members in Uganda to promote empowerment, support psychological well-being, increase self-esteem and enhance local capacity building.

"The illustrations were first created in 2008 in Tororo, and by August 2011, Gulu residents wrote their own personal recollections in diaries describing events they lived through. They painted scenes depicting their beautiful and sometimes harrowing tales. As a collective group, we combined the essays into one – to colorfully tell the story of the Acholi people."

"We hope this storybook will bring Ugandan readers closer together and allow the chance for others around the world to share in this experience, while learning about northern Uganda’s remarkable culture and its people.”

The Story of the Acholi – A Village Tale from Uganda was made possible through a strong collaboration between Artfully AWARE, Childcare and Development Organization and Karin Parents Association.

Posted by Michael Deibert at 8:38 PM No comments: