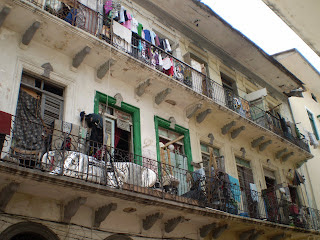 Having arrived in Panama City aboard the red-eye from New York via Miami on Tuesday, I was fortunate enough to spend yesterday rhapsodizing over the architecture and ambiance of the Panamanian capital’s elegant and decidedly still-auténtico quarter of San Felipe, also known as Casco Viejo. Here, only a few miles from the impersonal high-rises of Panama City’s downtown residential and business districts, one can still wander the quiet colonial streets and see the beauty of Spanish architecture strung along the Bahia de Panama. Though many of the homes are in varying states of disrepair, one can tell that creeping gentrification is afoot, with sleek real-estate offices competing for space with multi-family dwellings and vendors pushing their carts selling flavored ice shavings. A considerable sojourn with my novia there was an enjoyable introduction back into Latin America.

Panama City’s history has been nothing if not tumultuous, and in fact this location s the second on which the city was built- - the first was thoroughly sacked by the British privateer Henry Morgan in 1670. San Felipe itself abuts El Chorrillo, a very poor neighborhood that was largely burned in a mysterious blaze in the wake of the 1989 U.S. invasion which ousted Panamanian leader Manuel Noriega from power. The city now is a flourishing banking and commercial centre for Central America, with a sizable émigré community from neighboring Colombia.

Today, we go to see the Panama Canal and tomorrow off to the Caribbean archipelago of Bocas del Toro. As we make our way up through the isthmus to an eventual destination of Belize, I believe that feeling Latin America around me again, speaking its language, meeting its people, will be a bit like meeting an old friend after my many months in Africa. Something to look forward to it.
Posted by Michael Deibert at 4:56 PM No comments:

LALIBELA, Jul 3, 2008 (IPS) - Carved into the rugged mountains of northern Ethiopia, the eleven churches of Lalibela have for centuries remained among the most stunning visions a traveler can encounter.

Hewn out of the rock amidst a stark landscape, the structures represent perhaps the greatest flowering of the devotional creativity associated with Ethiopia's Orthodox Christian church, one of the oldest Christian denominations in the world.

Gebre Mesqel Lalibela, the ruler of the Zagwe dynasty, commenced construction of the churches following an extended period living in Jerusalem. Following Jerusalem's capture by Muslim forces in 1187, a dream told him to recreate the splendors of that city in Ethiopia. In a tribute to Lalibela's vision and the toil of an unknown number of labourers, the location has lost none of its power to awe even 800 years after its creation.

Among the houses of worship, one finds the Church of the Virgin Mary - the first church to be carved -- decorated with lush carpets and tapestries depicting angels, cherubs and seraphim. Prayer rooms hold crosses made out of gold, copper and iron whose intricate designs are fraught with religious symbolism; religious drums known as keberos rest against stone walls.

The Church of St. George, the last to be constructed, is carved in the shape of a giant cross four-stories high, seeking to symbolically represent Noah's Ark. Its spiritual power is such that the walls surrounding it are full of the bodies of pilgrims who, for hundreds of years, have chosen the church as the place to draw their final breath and were laid to rest in crevices in the structure. Lalibela himself is said to have been buried in the Bete Golgotha cathedral.

A complex engineering feat by any measure, the Lalibela churches also possess a sophisticated drainage system that assured that though the churches are cut deep into the surrounding rock, no water remains inside the complex.

Interrupting this architectural and religious splendour however, is a garish steel structure looming over five of the churches that could not look more ill-at-ease in its antique surroundings. Beneath the edifice, hovering like a spaceship making a tentative landing, a sign proclaims that the European Development Fund of the European Union is financing the project, which is being carried out be a team of architects from Italy.

Read the full article here.
Posted by Michael Deibert at 11:38 PM No comments: