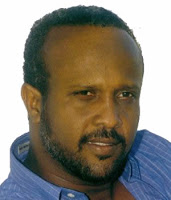 Please consider buying CD's of Jacques Roche reading his own work here. Jacques was a fine journalist, poet and activist who was murdered in Port-au-Prince in July 2005. MD

Posted by Michael Deibert at 8:10 PM No comments:

NEW ORLEANS—One balmy night in late April, Floyd Moore, a 31-year-old with a history of drugs and weapons violations, was riding his bicycle past the B.W. Cooper Housing Development in the impoverished Central City neighborhood of this port city hemmed between the Mississippi River and Lake Pontchartrain.

He never made it to his destination.

The slaying was highly symbolic of the tide of violence washing over New Orleans. At the site of a public housing development that for several years has been in the process of being torn down in part and re-envisioned as a mixed-income area, police recovered more than 100 shell casings—including some from an assault rifle—around Moore’s lifeless body. A 21-year-old man from the neighborhood of Algiers, on the west bank of the Mississippi, is being sought for the killing.

Things were not supposed to turn out like this.

This city of nearly 344,000 boasts a unique, enticing cultural bouillabaisse in which optimistic “NOLA Rising” bumper stickers are common. An always eclectic and rollicking music scene has been joined by a vibrant artistic renaissance spurred both by local artists and hundreds of transplants from other parts of the United States who have moved here in recent years to take part in the hoped-for rebuilding following the devastation wrought by Hurricane Katrina in 2005.

Last May, the city welcomed as its mayor Mitch Landrieu, the scion of a Louisiana political dynasty that includes a former mayor (Moon Landrieu) and a current United States senator (Mary Landrieu).

With Landrieu, the city also got a new police chief, Ronal Serpas, who had previously been police chief of Nashville, Tenn., and who said at his swearing-in ceremony that, under his watch, the 1,395-member New Orleans Police Department (NOPD) would focus on violent crime “like a dog on a bone.”

However, last year New Orleans witnessed 175 murders, or roughly 52 per 100,000 residents -- 10 times above the national average and a level that puts the city’s homicide rate just behind that of violence-racked Guatemala (at 53 per 100,000), a country beset by warring street gangs and drug cartels. In a fairly typical 24-hour period this month, four people ranging in age from 20 to 52 were slain in different parts of the city.

Far from making a dent in the shocking homicide rate, the NOPD has instead been nearly consumed by a series of scandals, with many residents wondering aloud whether Serpas will survive as chief.

“We have a thriving drug trade, a lack of legitimate employment that creates a labor force for drug dealers, and a compromised criminal justice system,” says Peter Scharf, a professor at the Department of International Health and Development at the city’s Tulane University.

An investigation of the NOPD published in March by the U.S. Department of Justice concluded that “basic elements of effective policing -- clear policies, training, accountability and confidence of the citizenry -- have been absent for years" and that "constitutional violations span the operation of the entire Department."

The report went on to detail the "severely deficient" training of officers and a worrying system of what are known as "paid details" whereby officers are allowed to work for private companies or individuals while in NOPD uniforms. The report called the system an "entrenched and unregulated" phenomenon that facilitated corruption within the department.

For weeks, Serpas himself has been mired in a mini-scandal of his own, one focusing on the outsourcing of traffic camera reviews to a company owned by a close friend. A police investigator has said that he has thus far found no evidence of wrongdoing on the chief’s part.

“The problem is when it comes to the police department, we have an endemic layer of corruption,” says Simone Levine, deputy for the New Orleans Office of the Independent Police Monitor, where a staff of four is charged with overseeing the behavior of the NOPD.

“You have good officers but then you have a culture that really hasn't had much input from the outside world,” Levine says.
* * *

Rather than welcoming the Justice Department’s report, several neighborhood associations from more affluent areas of the city have attacked the proposed changes in the paid detail system and in their ability to hire individual NOPD officers to provide security. Last month, Serpas announced that the NOPD was creating a civilian-administered Office of Police Detail Services that would set restrictions on how many hours officers could work and how they would be paid.

“If we weren’t hiring them, what would they be doing?” says Karen Duncan, the chair of the Upper Hurstville district’s board of commissioners. “They wouldn’t be out patrolling less affluent neighborhoods. We’re not taking them away from something else.”

Also taking aim at crucial city services is a poisonous political battle in Louisiana’s state Senate, up the river in Baton Rouge. Some legislators have been rushing to patch a $1.6 billion gap in the state’s budget by proposing, in part, $11.7 million in cuts from the state’s Department of Children and Family Services. In addition, $58 million in cuts are proposed by Gov. Bobby Jindal, a Republican. The reductions would affect precisely the kind of early-interception programs so needed in high-crime city neighborhoods such as Central City, Pigeon Town and Gert Town.
* * *

Quite apart from the concrete grimness of districts blighted by unemployment and crime elsewhere in the United States, many of the more impoverished parts of New Orleans have a ramshackle, semi-rural ambiance more reminiscent of Kingston or Belize City than anywhere else, a curious cultural and aesthetic echo in a place that is often called the northernmost city in the Caribbean.

It was an aura visible in Central City recently, at the dedication of a Head Start training center named after late longtime community activist Peter W. Dangerfield.

With a brass band gliding along this city’s distinctive “second line”rhythms and a feast of Crescent City cuisine underneath a tent, members of neighborhood groups such as the Central City Economic Opportunity Corp. (EOC) reflected on their struggle against often great odds to help redefine the experience of so many who live on the downside of advantage here.

Among other services, the group has provided senior care in the neighborhood since 1970 and child care since 1980. With state funds, the EOC provided a multimedia after-school program for school-age children from 1970 until 2005, when the building housing the program was destroyed by Hurricane Katrina.

“We’ve been affected greatly by the cuts in human services,” Edwards says. “They cut services on the backs of the poor, the most vulnerable.”

Indeed, to the visitor New Orleans, despite its great charm, can often seem like a city out of place and time, where the fortress-like class dynamic one sees in economically stratified societies such as those of Central America has somehow set down pernicious roots and remains obstinate and far more resilient than the delicate oleander blossoms that perfume the city’s streets in springtime.

New Orleans is a place where old habits die hard. It is a place where the city’s disenfranchised majority waits, like tourists gathered for the St. Charles Avenue streetcar as it approaches, clattering through the night and illuminated by lights from within. Like the city itself, trying to at long last reach its safe destination.
Posted by Michael Deibert at 11:24 PM No comments:

Posted by Michael Deibert at 11:27 PM No comments:

Posted by Michael Deibert at 4:32 PM No comments:

This highly disturbing and highly graphic video - with English subtitles provided in another version by Libyan blogger Tasnim Qutait - appears to show Syrian soldiers in the city of Dara’a mocking the corpses of dead protesters and planting ammunition on them in an an attempt to stage a scene for an "official" recording. The dead men appear to have been shot in the head at close range.

The New York Times is reporting that the Syrian Revolution Coordinators Union "purchased the video, which appears to have been shot on two different cameraphones, from a member of the security forces for 200 Syrian pounds (about $40)."

I generally refrain from posting graphic content on this blog, but what is currently befalling the people of Syrian is too big to ignore. I cannot help but think that any government that is doing this to its citizens is not long for this world.

Again, the content is extremely graphic so I strongly advise discretion if viewing.

Posted by Michael Deibert at 6:06 AM No comments: 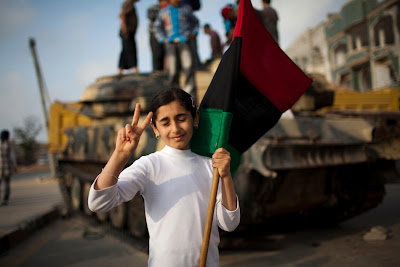 In this photo taken Wednesday, May 25, 2011, a girl poses for the picture next to a military tank on Tripoli Street, the center of fighting between forces loyal to Libyan leader Moammar Gadhafi and rebels in downtown Misrata, Libya. (AP Photo/Rodrigo Abd)

Posted by Michael Deibert at 8:19 PM No comments: