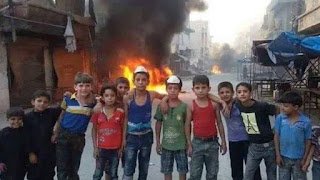 Children in Aleppo with a pile of burning tyres behind them, which they are setting alight to create a smokescreen against the bombing runs of the Assad regime and Russian planes. Photographer unknown.

A Review of Francesca Borri's Syrian Dust: Reporting from the Heart of the War

The blood-spattered, dust-covered face of Omran Daqnees, pulled from the rubble of his family’s home after a bombing in the Syrian city of Aleppo, wrenched the world’s collective conscience last month. Once the flourishing capital of Syria’s most populous region, Aleppo has been in a state of war since July 2012. The so-called barrel bombs of Syria’s President Bashar al-Assad - fiendish contraptions filled with explosives, shrapnel and sometimes chemicals - have killed thousands of people in the city, and have now been joined by more technologically advanced though no less lethal air assaults by the jets of Assad’s Russian backers.

This year, the relentless carnage of Syria’s five-year old civil war - pitting the Assad government and its allies in Russia, Iran and Lebanon’s Hezbollah against a flailing panoply of rebel groups including the so-calles Islamic State (ISIS), the until-recently Al-Qaeda-affiliated Al-Nusra Front, the Free Syrian Army (now believed to be all but defunct), various Kurdish militias and others - continued under the world’s impotent gaze. Death rained down on cities like Aleppo and Daraya (the latter finally falling to the government in late August) as ISIS-inspired attacks fanned out to Bangladesh, Belgium, Turkey and elsewhere, building on the horror of last year’s assaults in Paris.

But in so many ways, and not just in young Omran Daqnees’ traumatized, terrified gaze, Aleppo, broken, bleeding Aleppo, has remained the centre of it all. And Syrian Dust (Seven Stories Press), the excellent book by Italian journalist Francesca Borri recounting her reporting from the city between 2012 and 2013, presents a vital primary source recounting a siege that has over time became one of the 21st century’s great crimes.

Who would defend the people of Aleppo after their government began killing them four years ago? In Borri’s account, the Free Syrian Army is depicted as something of  a joke of flip-flop wearing teenagers and regime defectors. Al Nusra is better-armed,  but consisting of so many foreign nationals, their lingua franca is English. And thus a terrible dynamic develops, whereby a disparate armed insurgency fights a seemingly endless stalemate with a dictatorship capable of any atrocity.

“In theory, there are four fronts,” Borri writes. “But the truth is that there is only one front here: it’s the sky. And those who have nothing but bullets to use against the fighter jets haven’t got a chance. Without intervention from the West, as in Libya, the Syrian Free Army can’t win.”

That intervention never came, at least not in the way that Borri means it, but plenty of people did find opportunity in Syria’s agony.

There are the cynical exile opposition politicians who appear in squalid refugee camps to seek support and “distribute a few biscuits like a tourist feeds the pigeons at Piazza San Marco.” There are the Saudi rebels backers who appear and literally buy child brides from starving refugees huddled along the Turkish border. There are Borri’s own journalistic colleagues who, for the most part, far from being united by idealism, mostly appear driven to seek out the most garish and bizarre elements (“find me a drunken child soldier!”). Reporters level misogynistic advice with one hand (with one self-mythologizing reporter informing her Aleppo is “no place for a woman”) and engage in potentially lethal backstabbing with the other, with Borri allegedly once being directed towards snipers, and another time being ratted out to rebels by an ostensible colleague envious for a scoop.

And in the meantime, “you wait and you die in Aleppo, that’s all,” she writes, going on to pen that for those remaining in the city beneath Assad's planes

These are the cruelest moments, because the mind is still lucid. And as the pilot chooses his target, while maybe it will be you, all you can do is huddle there, your back against a damp wall, and stare at the floor along with everything you’ve left undone in your life, everything you put off, as you look around, now that maybe your number’s up, and even if you had something to say, here among these strangers, anything you could utter, any name, any wish, any regret whom could you say it to?

The book has its weaknesses, both in its sometimes meandering digressions into the author’s previous life working in Israel and Palestine, and in its one big omission in the lack of an real discussion of the rise of the Islamic State (there are a number of references to Al Qaeda but almost none to ISIS). But this is perhaps the result of the book’s being published first in Italian in May 2014, just as the terrorist group was becoming the major player in the conflict

But Syrian Dust’s true strength is its depiction of the terrified, terrorized lives of the Syrians living under the Assad regime’s brutal and relentless barrage. Borri tells us the story of a 25 year-old mother reduced to living in a drainage pipe with her 3 children who ventures out to buy bread with her youngest and is shot by a sniper, leaving her other two offspring “wasted away in poverty until a mortar pulverized them.” In Moadamiya “only six miles from the centre of Damascus...where bankers play tennis at their clubs...it looks like Somalia, with those bodies that are all bones.” During the siege of Al-Qusayr, she receives frantic texts from those inside the city: “Where are you? They’re killing us all!”

At the end of the book, comparing the city to Dresden after World War II, she writes simply and devastatingly “Aleppo no longer exists” and that “everything I may write, no matter how good, whatever life I may risk, this war and every war will go on.”

And go on it does.

There was another child pulled from the rubble in Aleppo the same day as Omran Daqnees: Omran’s brother, Ali.

He had been playing with friends in the street when the bombs began to fall. Like most of those in Aleppo’s agony, there was no photo to mark that moment or aftermath, nor did the world’s news sources and social media rouse themselves to a cri de cœur to mark his short life.

And like so many in Aleppo, as the world stood by, he died.


Michael Deibert is the author of the forthcoming Haiti Will Not Perish: A Recent History (Zed Books).
Posted by Michael Deibert at 5:29 PM No comments: