René Préval, who has died at the age of 74, will be remembered as the only president in Haiti’s history who twice turned power over to a democratically elected successor in a country marked by coups and political strife.

Haiti’s leaders are often defined by their grandiose tastes and a love of the sound of their own voices, but Préval’s style was understated. Whereas some previous Haitian rulers would hold court seated on what resembled a golden throne, Préval’s ethos was better summed up by the time he arrived at the border town of Belladère on the back of a motorcycle-taxi to tell residents that his goal for the country was peace.

René was born in Haiti’s capital, Port-au-Prince, the son of Claude Préval, who had served as a government minister. He was raised in the northern agricultural town of Marmelade before departing to study agronomy in Belgium and eventually living in New York for a time. During that era, Haiti groaned under the dictatorship of François Duvalier and his son, Jean-Claude.

Upon his return to Haiti, Préval worked at the capital’s airport for a time before founding a bakery for poor people with the civil society leader Michèle Pierre-Louis, who later served as prime minister. The bakery supplied bread to a radical young priest named Jean-Bertrand Aristide in the capital’s La Saline slum, and Préval became active in the democratic movement that succeeded in removing the younger Duvalier from power in 1986.

In 1991, when Aristide became Haiti’s first democratically elected president he appointed Préval prime minister, only to be overthrown in a military coup seven months later. The pair spent three years in exile until democracy was restored thanks to a US-led military intervention, Operation Uphold Democracy. Aristide was returned to power, and in 1996 Préval succeeded him.
His first term was marked by attempts at agrarian reform, furious political battles with opposition politicians and a series of assassinations, culminating in that of Préval’s closest friend and adviser, the journalist Jean Léopold Dominique, in April 2000. Succeeded in 2001 by Aristide, whose chaotic and despotic rule was truncated by his overthrow after three years, Préval took over from an unelected interim government in 2006 and, against all odds, managed to bring a measure of tranquillity to a country divided between heavily armed partisans and opponents of the former president.

Préval was perhaps unique in that he represented a figure in whom many sides of Haiti’s stratified nation, from the rich in their villas above Port-au-Prince to those in the slums, felt they had a representative. Shortly before he took office for the second time, he spoke to reporters in his sister’s backyard and told them that Haiti was like a bottle which must rest on its broad base to be secure, because resting on its narrow mouth (ie the presidency and the country’s elite) it would topple over and shatter.

An adroit dealmaker, Préval maintained convivial relations with world leaders as diverse as George W Bush and Hugo Chávez as he sought to court investment and stabilise political institutions in Haiti. While he was in office, the press went about its business unfettered and the police, so often used as a private army by his predecessors, operated with relative independence.

Despite his subdued style, Préval was hardly naive, displaying a Machiavellian grasp of Haiti’s political factions – sometimes opportunistically overlapping, sometimes bitterly competing – that allowed him to stay several steps ahead of those who periodically wanted to remove him from power. He was capable of betraying old friends in the name of political expediency and showed little appetite for holding his predecessors to account for their crimes.

When an earthquake devastated the capital and its environs, killing more 300,000 people, in 2010 Préval appeared at times paralysed by shock, leading many of his rivals to call for his resignation. (Préval himself had had a narrow escape: he had just been about to go into his home when the earthquake hit.)

In 2011 he turned over the reins to his successor, the singer Michel Martelly – whose stage name had been Sweet Micky – an opposition figure who nonetheless publicly said that he came to rely on Préval’s counsel during his time in office. Préval returned to Marmelade, where he worked on projects which included an agricultural co-operative, an education centre and a juice factory. His last public appearance was at the investiture of Haiti’s new president, Jovenel Moïse, a few weeks before Préval died.

She survives him along with two daughters from his first marriage, Dominique and Patricia, two sons and three sisters.

Thanks FSU for the nice poster 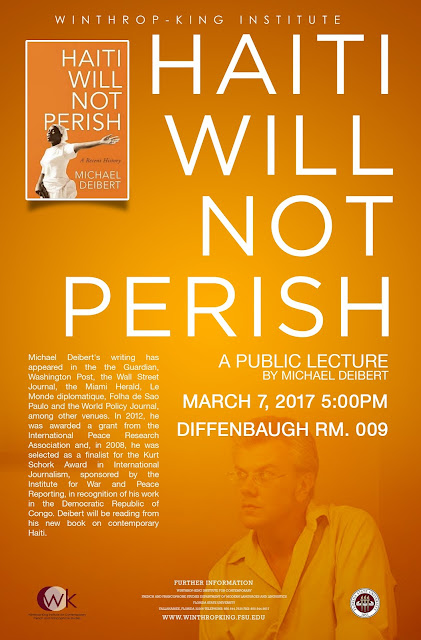 Posted by Michael Deibert at 2:42 PM No comments: