Jacmel in all my dreams 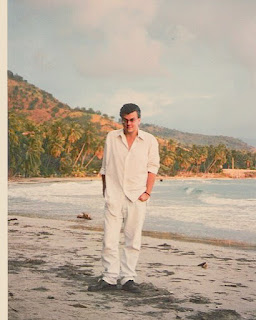 The author at Ti Mouillage outside of Jacmel, Haiti, November 2002.

Jacmel in all my dreams

“At All Hallows Eve, the Guédé spirits of the dead overrun the countryside and towns,” wrote the Swiss anthropologist Alfred Métraux  in his pioneering 1958 study Le Vaudou haïtien.“Clad in black and mauve, people possessed by them may be met not only in the sanctuaries but also in the markets, public places and on the roads.”

The name given to a family of vodou lwa (spirits) that embody the power of death and fertility (and the interlocking relationship between the two), the pantheon of Gede (as it is spelled in Haiti’s native Creole language) also give their name to Fèt Gede, the time on 2 November when, as Métraux noted, the power of the spirits and those “ridden” (possessed, if you will) by them burst forth from the peristyles (temples) of Haiti’s vodou faith and into its cemeteries, streets and squares.

In November 2002, I was living in Haiti and the country was, as is often the case, in the thrall of a political crisis that would see the ouster of a despotic president a year and a half later. Various political factions stood, daggers drawn, waiting for the final dénouement.  As the political situation deteriorated and Fèt Gede approached, a friend from New York came to visit me, and we decided that we would spent part of the weekend outside the southern town of Jacmel, where I rented a cottage by the ocean.

Haiti’s history may have been a relentless drumbeat of tumult, but Jacmel, looking out to the sea and ringed by mysterious, looming mountains, its colonial architecture falling into deliquescent disrepair and wreathed in dripping greenery, had always seemed to maintain some semblance of equilibrium among the chaos.

After the decisive defeat of the French by Haiti’s revolutionary forces at the Battle of Vertières on 18 November 1803 and the declaration of Haiti’s independence on 1 January 1804 (the second nation in the Western Hemisphere after the United States to do so), Jean-Jacques Dessalines declared himself emperor before being slain in October 1806. After the death of Dessalines, Haiti’s black and mulatto tensions erupted anew, with Henri Christophe controlling the north and crowning himself King Henry I, building an extraordinary palace, Sans-Souci, modeled on Versailles, and a massive fort, Citadelle Laferrière, from which to survey the entirety of the northern plains. In the south, Alexandre Pétion ruled a mulatto-dominated government of a less imperial nature and gave refuge in Jacmel to South American revolutionary Simón Bolívar as the latter plotted his campaign to liberate his own region from Spanish colonial rule.

Jacmel remained one of Haiti’s most iconic towns, hosting its most colorful carnival and serving as the setting for, among other books, René Depestre’s 1988 novel Hadriana dans tous mes rêves, a magic realist and often intensely poignant tale of eroticism and vodou.

For me, at least, especially during my early years in Haiti, the city was always associated with an eccentric American named Selden Rodman.

A writer and critic born in New York City in 1909, Rodman had written a play, The Revolutionists, about Haiti’s slave uprising and along with De Witt Peters, had opened the Centre D’Art, Haiti’s first professional art school, in 1944. He had helped supervise the covering of the interior of Port-au-Prince’s Cathédrale Sainte Trinité with stunning murals by eminent Haitian painters like Wilson Bigaud and Philomé Obin depicting Biblical scenes such as a black John the Baptist and a near-nude Adam and Eve with an apple and a snake in between them. On my first visit to Haiti in 1997,  I wandered around the steaming, fume-choked lanes of anba lavil, as Haitians call downtown, and strolled into the chapel, mesmerized by the art I found there. [The Cathédrale Sainte Trinité was destroyed in Haiti’s January 2010 earthquake].

After that first trip, I returned to New York, where I was living at the time, and eventually looked Rodman up and took the bus out to visit him at his home in Oakland, New Jersey. Elderly but still vigorous, he shared rum punch with me after he came into his ranch-style home from a game of tennis. The house, which he shared with his wife Carole, was adorned from floor to ceiling with Haitian canvases, exquisite examples of work by painters such as Stevenson Magloire, and Magloire’s mother, Louisiane Saint Fleurant, one of the members of the highly regarded Saint-Soleil art movement in Haiti. Still quite lucid, he regaled my with stories of his years in Haiti, and spoke fondly of the rambling colonial house he had maintained for years on Jacmel’s Rue du Commerce which, after he had stopped visiting regularly, had been turned into a guest house, the Hotel Florita. Speaking to him, I had the sensation of being in the presence of a living link to Haiti’s past. As I left him with his memories in the gathering dusk to head back to Brooklyn, I wondered how much of his soul the old man had left back in Haiti.

During my years living in Haiti, first as a correspondent for Reuters and then as a freelance journalist, I developed a deep affection for Jacmel, and frequently stayed at the Hotel Florita, which often appeared otherwise nearly unoccupied. Eventually, along with a French photographer friend, I began renting a small beach cottage in the town of Ti Mouillage just outside Jacmel, where I would go on weekends to seek respite from Haiti’s chaotic political climate, swimming in the Caribbean or reading in a hammock amid the incessant crashing of waves nearby.

So it was to Jacmel my friend and I decided to travel on Fèt Gede. After spending much of 1 November in the Grand Cimetière in Port-au-Prince - a sign at whose entrance helpfully reminded Souviens—Toi Que Tu Es Poussiere (Remember you are dust) - interacting with Gede adherents in various states of exultation, we drove south, through a light rain in the mountains that eventually cleared to reveal Jacmel, glittering like a jewel by the sea.

We spent much of that evening at a vodou ceremony in the countryside, returning to Ti Mouillage to fell asleep to the churning sea. Awakening the next morning, we drove into Jacmel. We parked our car and approached the Hotel Florita.

As we walked through the hotel, on this day eerily empty, all the doors and windows were open and white curtains fluttered in through the doors on the breeze from the Bay of Jacmel, as if airing out before its owner returned from a long absence. The moss and vines in the courtyard hung with melancholy, and my friend and I kept close to one another as we walked through the rooms and looked down from the balcony onto a deserted street.
After returning to Port-au-Prince, and following a drive during which we both felt compelled to comment on the the melancholy, sapient aura that filled the house on Rue du Commerce, we found out that Selden Rodman had died the very afternoon we were walking through the Florita. Perhaps, we thought, the presence we had felt had been the ghost of Selden Rodman, after all, come back at long last to Haiti to be among the lwa on this of all days.

Posted by Michael Deibert at 4:04 PM