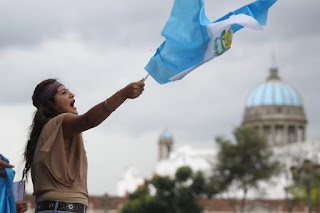 When former comedian Jimmy Morales was elected as Guatemala’s president as the candidate for the Frente de Convergencia Nacional (FCN) this past October, his victory came at the conclusion of perhaps the most tumultuous few weeks the country has seen since the end of its 30-year civil war in 1996.

Central America’s most populous country and its largest economy, Guatemala has often been the called the Land of Eternal Spring due to its temperate highland climate. By the 1980s, in the middle of a three decade long civil war, some added “Land of Eternal Tyranny” to the description in reference to its long list of sanguinary military governments.

In the 20 years since then, Guatemalans have enjoyed democracy, of a sort. Elections were held on schedule and with regularity, and an alternating series of civilian presidents from political parties of various ideological stripes have all taken their turn in steering the ship of state. Violence and corruption, often with official complicity, however, have continued to darken the country’s political landscape, often coupled with a pervasive and corrosive impunity benefiting those perpetuating it.

Following the 1996 peace accords, Presidents Álvaro Arzú of the Partido de Avanzada Nacional and his successor, Alfonso Portillo of the Frente Republicano Guatemalteco (of former dictator Efraín Ríos Montt, who presided over some of the civil war’s worst human rights abuses), implemented many key provisions of the peace accords half-heartedly, if at all. By then, Guatemala's clandestine criminal networks had spent a decade successfully inserting themselves into virtually every manifestation of the state.

By 2005, the government of then-president Oscar Berger warned that Los Zetas, then enforcers for the Mexico’s Gulf Cartel and since 2010 an independent drug trafficking organization in their own right, were recruiting into their ranks members of Los Kabiles, a special-operations unit of the Guatemalan army trained in jungle warfare and counterinsurgency tactics, and which boasted a horrific human rights record in Guatemala itself. Los Zetas expanded their control of the country roughly at the same time as the beginning of the mandate of Álvaro Colom, who had become president the previous January as the candidate of the of the left-centre Unidad Nacional de la Esperanza (UNE), and his tenure would forever be marked for their violence.

The July 2010 killing of Obdulio Solórzano, a former Escuintla deputy and member of UNE’s executive committee as he drove through Guatemala City’s Zona 13 district, helped to reveal just how deep the links between crime and politics were.

After his stint in Guatemala’s congress, Solórzano had gone on to head the Fondo Nacional para la Paz (National Foundation for Peace or Fonapaz), a government organization set up in 1991 with the stated aim of funding programs to eliminate poverty. During his tenure it was discovered that some 1.4 billion quetzales (as the Guatemalan currency is known) could not be accounted for, and that some 32 NGO projects had been overvalued to the tune of Q93.7 million. He was dismissed in June 2009.

According to a Guatemala official I spoke with, Solórzano had long been the link between the San Marcos drug lord Juan “Chamalé” Ortíz - credited with first bringing Los Zetas to Guatemala - and several other drug traffickers and certain elements of the UNE. It was speculated that some of the inconsistencies in accounting during his time at Fonapaz may have been attempts to launder illicit drug profits. Jose Rubén Zamora, the crusading editor of Guatemala’s El Periódico, would later say that Guatemalan army general Mauro “Gerónimo” Jacinto (who was himself later murdered) described to him how Solórzano had funneled millions of dollars from drug traffickers such as Juancho León and from Los Zetas themselves into UNE campaign coffers to help Colom triumph in the second round of the contest over former general Otto Pérez Molina.

After Guatemala’s November 2011 presidential elections - which in the final round saw Otto Pérez Molina defeat a congressmen from El Petén of equally dubious reputation named Manuel Baldizón, Pérez Molina  announced that his government would have “a strategic plan to combat drug trafficking...in coordination with authorities in the United States and Mexico.”

But things were murkier than they appeared, as was demonstrated when Pérez Molina’s personal pilot, Haward Gilbert Suhr, the founder of the Aeroservicios Centroamericanos, S.A. group (which Pérez Molina was a shareholder in) was arrested along with a dozen other in San Pedro Sula, Honduras and charged with trafficking drug shipments on behalf of Mexico’s Sinaloa Cartel.

Finally, this past October, Otto Pérez Molina, resigned amid a corruption scandal that had reached the very pinnacle of the country’s political establishment, and was jailed the following day. The country’s former Vice President (she resigned in May), Roxana Baldetti, had been arrested and imprisoned in 21 August. Both are charged with running a criminal network known as La línea (The Line) while in office.

The arrests of the country’s two most powerful politicians took place following massive street demonstrations throughout Guatemala, and represented perhaps the apex thus far of the Comisión Internacional Contra la Impunidad en Guatemala (CICIG), a United Nations-mandated body that has operated since 2007, charged with investigating criminal organizations and exposing their relation to the state. Led by the Colombia judge Iván Velásquez Gómez, the swiftness with which CICIG, along with Guatemala’s Ministerio Público, brought about the downfall of the government was startling, especially given that Pérez Molina had only weeks left in office after this year’s presidential election,.

And what now in Guatemala? President-elect Jimmy Morales’ FCN was founded by former military officers leaning to the extreme right of the country’s military spectrum, including José Luis Quilo Ayuso, an associate of former dictator Efraín Ríos Montt, who currently has a possible genocide trial looming before him.

Will events of recent months mark a definitive break from Guatemala’s corrupt past? Despite the valiant efforts of Guatemala’s civil society. Guatemalan criminal organizations continue to make use of street-level gangsters as foot soldiers, as is evidence by an event several years ago that took place in Guatemala’s lethal and dysfunctional prison system, specifically the Varones in Guatemala City’s Zone 18 district, as was described to me by someone with direct knowledge of the case.

The impetus for the crisis was apparently precipitated by the presence in the prison of two well- known kidnappers, Rigoberto Morales Barrientos, alias Rigo Rico, and Jorge Mario Moreira alias El Marino. A senior government official allegedly received a sum of around 2 million quetzales (about USD 250,000) from the families of those victimized by the kidnappers to facilitate their execution inside the prison. Deciding to kill two birds with one stone, the individual then moved Morales Barrientos and Mario Moreira into two adjoining cells along with two other high-profile prisoners. These prisoners were Axel Danilo Ramirez Espinoza, aka El Smiley, a confessed member of the Mara Salvatrucha gang accused of participating in a wave of slayings of bus drivers that occurred in 2009 and Daniel Pérez Rojas alias El Cachetes, a Mexican citizen convicted this year of involvement in the March 2008 slaying of drug lord Juancho León, Shortly after the prisoners were moved, the CICIG received credible information that the men were to be murdered within hours and sent a delegation to the prison under the pretext that the prison would be receiving donation of closed circuit cameras and that it needed to be determined exactly how many would be needed. Once in the prison, they found the prisoners in two cells adjoining a cell of several gang members who were found to be in possession of several firearms and other weapons. The targeted prisoners were moved, and the incident was never made public.

The Morales presidency, which, despite often being erroneously portrayed as an outsider in the English-language press, is a creation of some of the most recalcitrant members of Guatemalan society, makes it hard for one to believe that Guatemala is not entering a key moment in its battle against impunity and corruption and that, in a year or two, Guatemala’s citizens will be on the streets in protest once again.